July 22, 2009
At last, the carpenters started framing the walls today. They started with the cottage, and because the concrete floor slab is still curing under the plastic and straw they had to assemble the walls on top of the plastic before erecting them.

These photos show the finished wall on the west side of the cottage, with one window in each bedroom. The outer walls are conventional 2×4 stud walls with studs 24″ on center, with a stud aligned directly under each roof truss. Later they’ll build the inner walls to form a double wall 16″ wide, which will get filled with cellulose insulation for a total R-value of about 60, which is more than 3 times the insulation level of typical houses built in this area.

July 23, 2009
By the end of the day the cottage walls were 3/4 done. What remains is the south wall, plus the interior wall along the porch. The first photo below is from the south looking north, and the second is from the north (atop the root cellar) looking south.

July 24, 2009
The outer walls of the cottage were finished up today. The big opening in the south wall is for the window unit that will form the south wall of the living room, with a triangular window that fits the vaulted ceiling inside. The second photo is looking south from atop the root cellar.

July 25, 2009
Today the carpenters framed the walls for the dining room bump-out in the main house. Since we haven’t ordered the windows yet, we’ll size the windows to match the rough openings instead of vice-versa. That way these windows will fill the available space in these walls.

Next they started laying up the sheathing on the cottage, which stiffens the structure a lot. They’ll run the sheathing right over the window openings and cut it out later, rather than trying to cut & fit the openings as they go. We chose to use plywood sheathing instead of oriented strand board (OSB), because the plywood is more moisture resistant and it will do a better job of holding the nails when the siding is attached to it. It’s a littlemore expensive than OSB but not a lot, and it will make the structure more durable.

July 27, 2009
Today they framed the rest of the south wall of the house. In the first photo below they’re installing the header over one of the large south windows, and the second photo shows the south windows in the dining room and the wall beside it. The passive solar gain from these windows will provide about a third of our heat in the winter.

After the south wall was done they continued around on the east side of the house, framing the interior wall that will separate the heated portion of the house from the unheated workshop and sun porch. This will become a double wall like the exterior walls, but because it’s not exposed directly to the outside it will be only 12″ thick instead of 16″ like the exterior walls. That will give us “only” about R-45 insulation in this wall, versus R-60 in the thicker walls. Even so it will still be 2.5 times better insulated than an average 6-inch stud wall.

July 28, 2009
Framing continued around to the north wall of the house, and here the carpenters are raising a section of the north wall. This shot was taken from atop the root cellar to the northwest of the garage.

The first photo below shows the south wall of the garage, with the front porch beyond it on the right. The second shot shows the view as you approach the front porch. You can see the rectangular depression in the porch that will hold the metal doormat.

July 29, 2009
Today they finished the last section of the north wall, and then framed in the front of the garage. Here they’re raising the large beam over the double garage door. Just to the right you can see the smaller beam over the single garage door. It looks like a 3-car garage, but it’s more likely to be a 2-car-plus-tractor-plus-trailer-plus-lots-of-stuff garage. 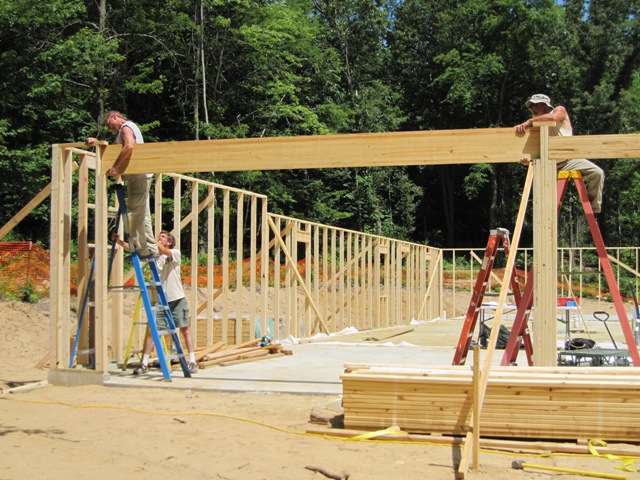 July 30, 2009
Today the carpenters framed the outer walls of the shop. This photo is taken from the east, looking west toward the shop. The south wall is not framed yet since it’s 18 feet high to create a large sloped roof over the shop. They’ll build that after the main roof trusses are in place.

August 1, 2009
These photos show the lower half of the wall sheathing applied to the north wall.

And this shows the front (west) side of the cottage and entryway with all of the sheathing in place. The front door of the house is on the left of this photo, with the cottage to the right.

August 3, 2009
Sheathing is mostly done, and this shows the wall dividing the house from the shop. This is just the outer wall, and there will be another one built next to it to form a superinsulated double wall. This was taken standing in the kitchen looking toward the living room.

Here are two views of the sheathing on the south wall, from inside and outside. The window openings aren’t trimmed yet so they’re partly covered by sheathing panels that will be trimmed away.

Here’s the sheathing applied to the cottage porch, also not trimmed yet.

August 11, 2009
The photos below show the completed and trimmed sheathing on the north and south walls.

Here are two views of the cottage with the sheathing trimmed.

Unfortunately, most of this needs to be removed and replaced! About half of the plywood sheathing is defective and has started to come apart after being exposed to the weather for only a short time. Ironically we chose to use plywood instead of the cheaper Oriented Strand Board because the OSB is less water-resistant in general, but in this case the plywood seems to have defective glue. The plywood manufacturer has agreed to replace the material and we’re expecting them to cover the labor also. Fortunately it should only take about a day to replace it, but it’s disappointing nevertheless.

August 18, 2009
Now that the main roof framing is complete and the exact roof height can be measured from the trusses, the carpenters built the front (south) wall of the workshop. This wall is about 18 feet high, which is necessary in order to get the clerestory windows above the porch roof that will sit in front. The first photo below is taken from inside the shop looking south, and the second photo is taken from just south of the house looking north. On the left in the foreground is the sunporch, and on the right is the open lanai. There are 7 clerestory windows at the top of the shop, each about 4 feet wide and 3 feet high. Once the sloping ceiling is in place this will throw a lot of indirect natural light across the whole workshop. The clerestories are awning windows so that we can leave them open all summer for ventilation.